Last October I went to Shetland, my third visit for Shetland Wool Week and three years since I last took in this amazing event. 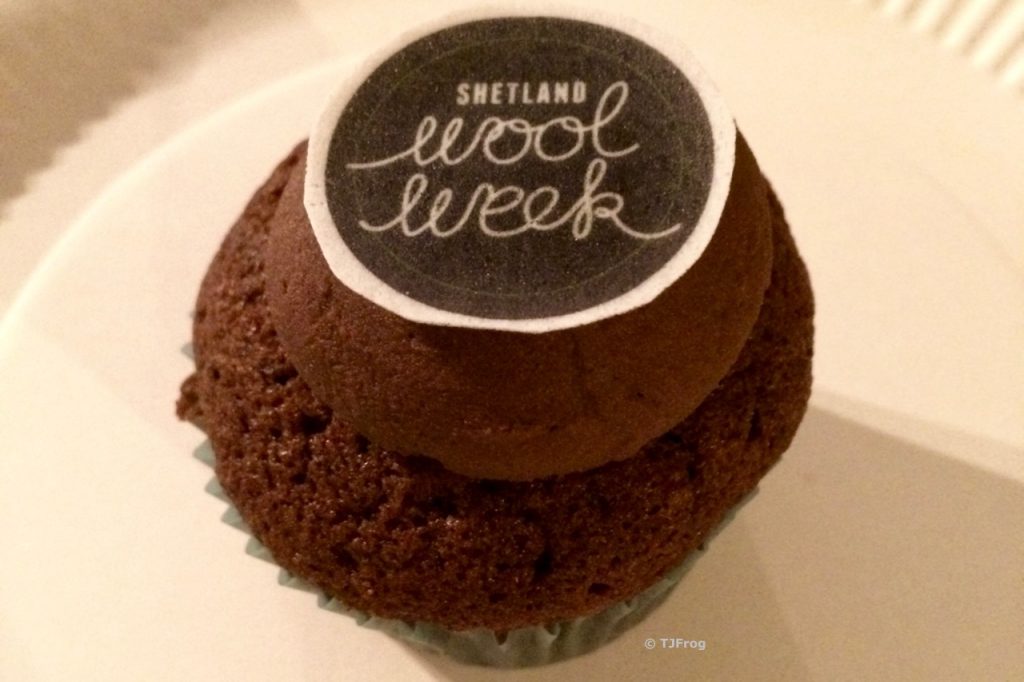 Many of you may know the Crofthoose Hat pattern designed by Ella Gordon, the elected patron for Shetland Wool Week 2016.  Offered as a free pattern this is a fantastic way to get knitters involved in Shetland Wool Week, raising awareness of the Shetland yarns and Fair Isle knitting, even if they are unable to attend.  For those fortunate enough to attend Shetland Wool Week the idea is to knit up your hat beforehand & wear it on your travels around Shetland.  Many knitters achieved this – I didn’t!

Determined not to buy more yarn I delved into my yarn boxes & found some lovely yarn I bought in Norway that I thought would work.  Many swatches later I realised what was in my head was never going to work in reality.  Sometimes you have to try & then admit defeat!  Something that doesn’t come easy to me!  Instead I decided to use some of the Jamieson & Smith 2Ply Jumper Weight bought back in 2012 for a jumper I’ve yet to knit.  What would be the problem if I used this & then replaced it when I was in Shetland – it’s not strictly speaking buying more yarn, is it?!

Having seen the contrast Ella created on her hat samples, I knew my colour options would create a more subtle change in colour. 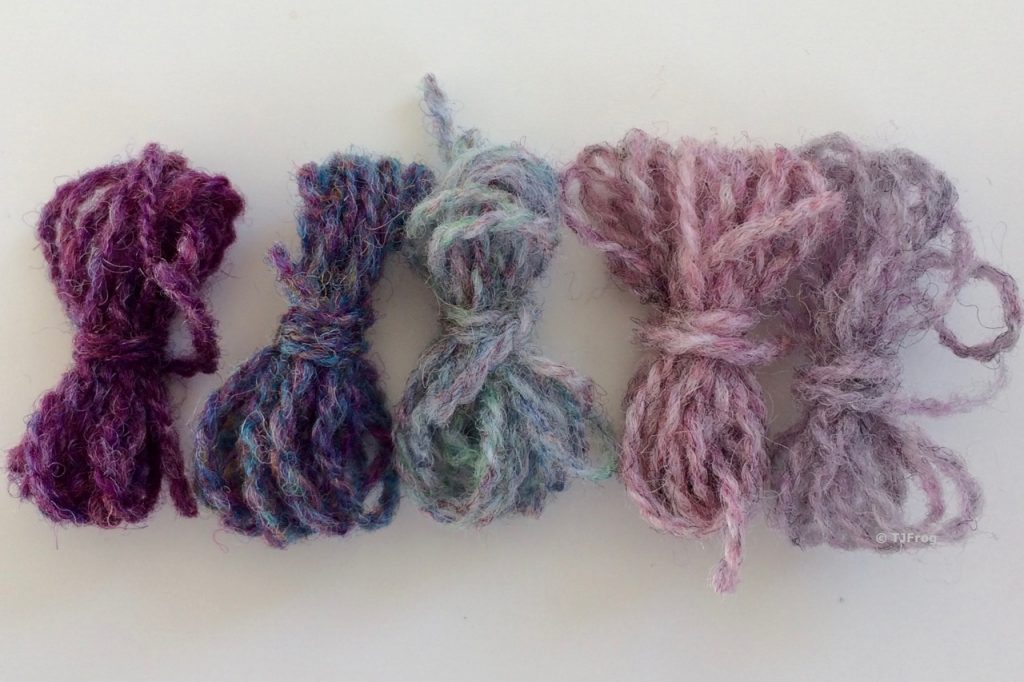 I knit fair isle infrequently & previously only for blanket squares & a cushion.  Nor have I knitted a hat for myself so this provided me with the challenge of knitting fair isle in the round, and, as a tight knitter, getting the tension right so it fitted on my head without stopping the circulation!  I’ve really worked on my tension over the past couple of years so was pleasantly surprised when the rib turned out comfortable to wear.

All this stash diving & swatching meant I didn’t have my crofthoose hat ready for Shetland Wool Week so it came along with me on my knitting needles.  At the Opening Ceremony I found I was in good company with a few other people who had yet to finish theirs.  Although throughout the week I did attract some comments of surprise that I’d not finished it before coming – naughty me!!!

On my return from Shetland it remained on my needles.  A few errors meant it got frogged a few times until I got to that point of it’s now or never, this has to be completed. Having finally finished the third row of crofthooses, I noticed what appeared to  be a tension problem, a very small & tight first row of crofthooses that looked completely out of kilter with the two above it.  After much deliberation, having already agreed with myself not to frog it again, I decided it really would have to be frogged.  Missing roof & chimneys turned out to be the problem, not my tension!  If I’d left it I suppose it would have provided a different feature & I could have claimed they blew away in the wind!

I might not have finished my hat in time for Shetland Wool Week although I am pleased to say I finished knitting & blocking it before the end of 2016. 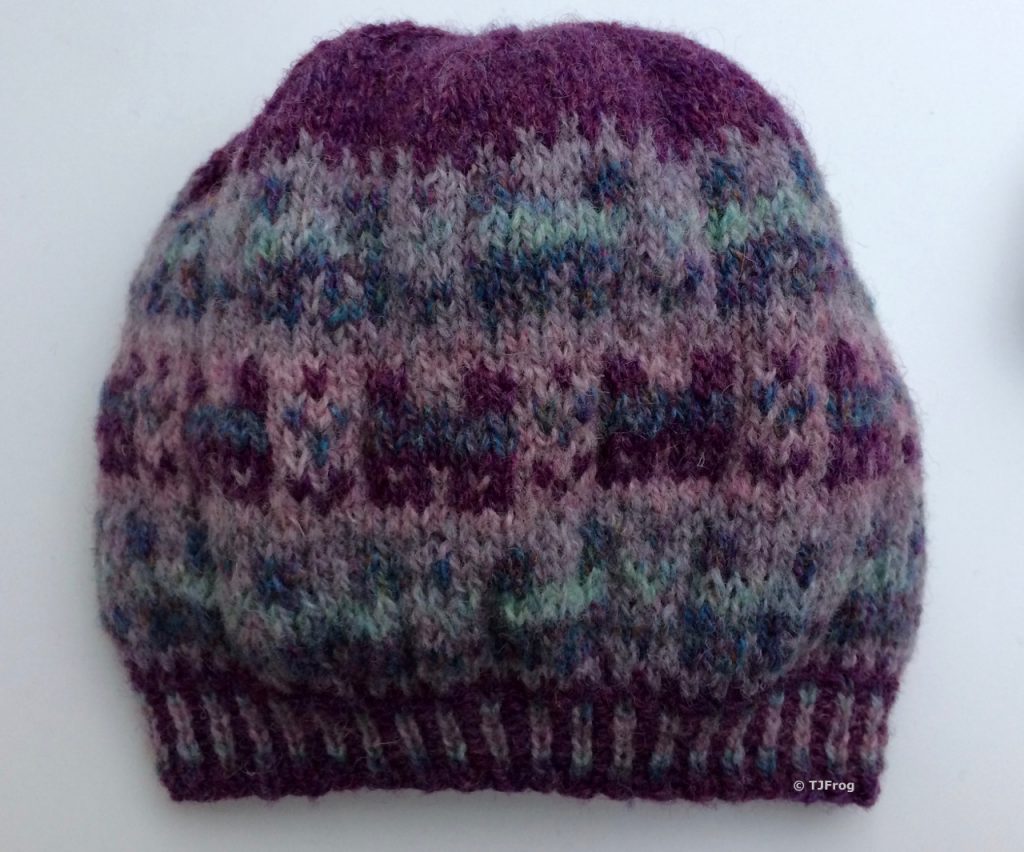 I opted to do a plain crown & felt it needed something to finish it off so I added a Dorset Button!  I made two Dorset Button, including all the colours in the hat, one with a lighter colour on the outside to form a contrast, and the second using the same colour as the hat crown on the outside. 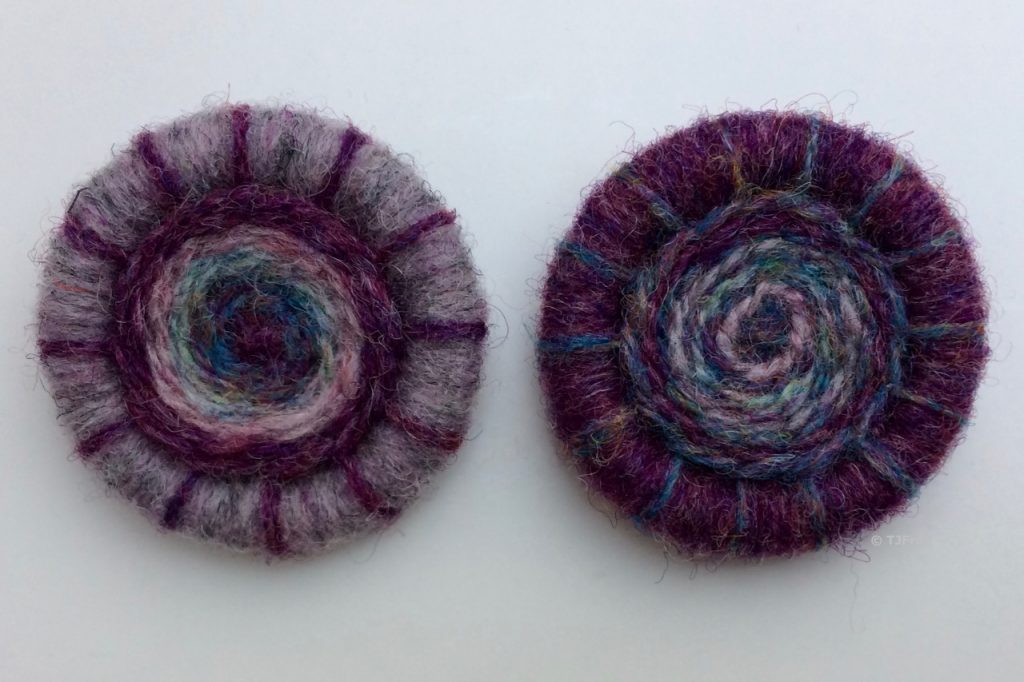 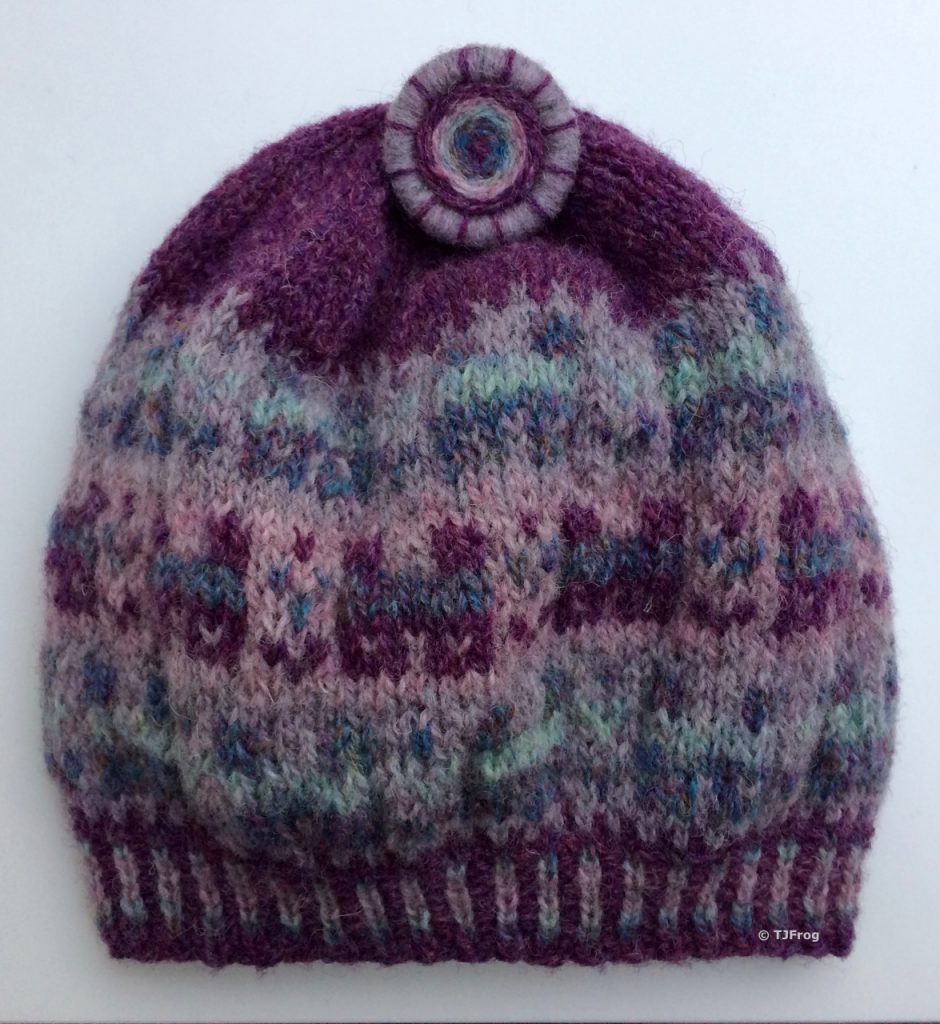 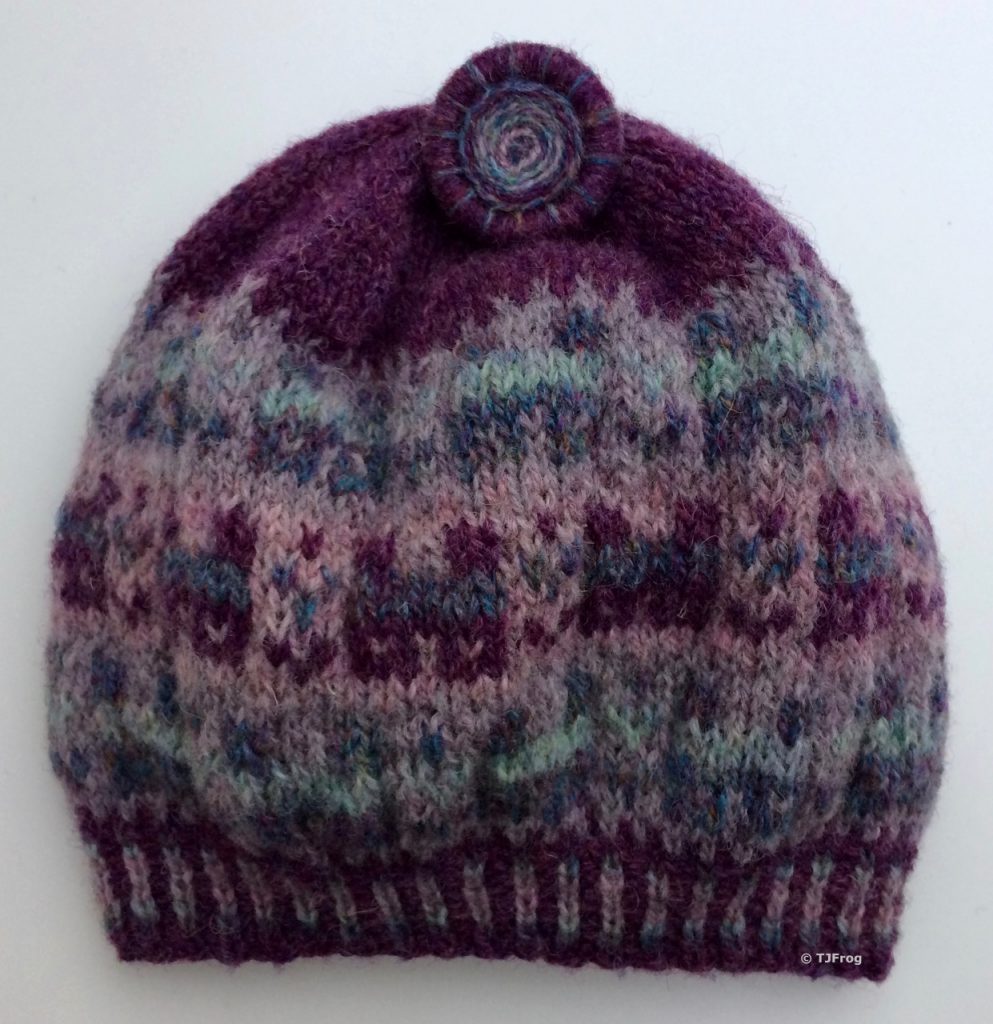 Prior to putting them onto the hat I thought the lighter one would work for me.  I didn’t like it feeling the contrast was just too much whereas I loved how the darker one blended in giving detail without being too obvious. 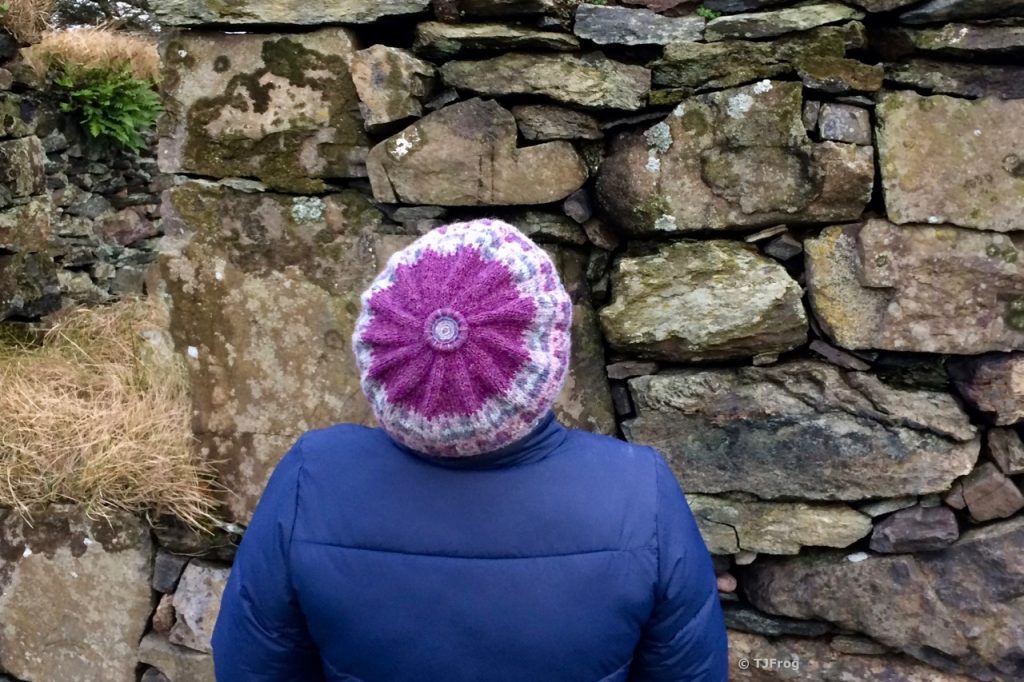 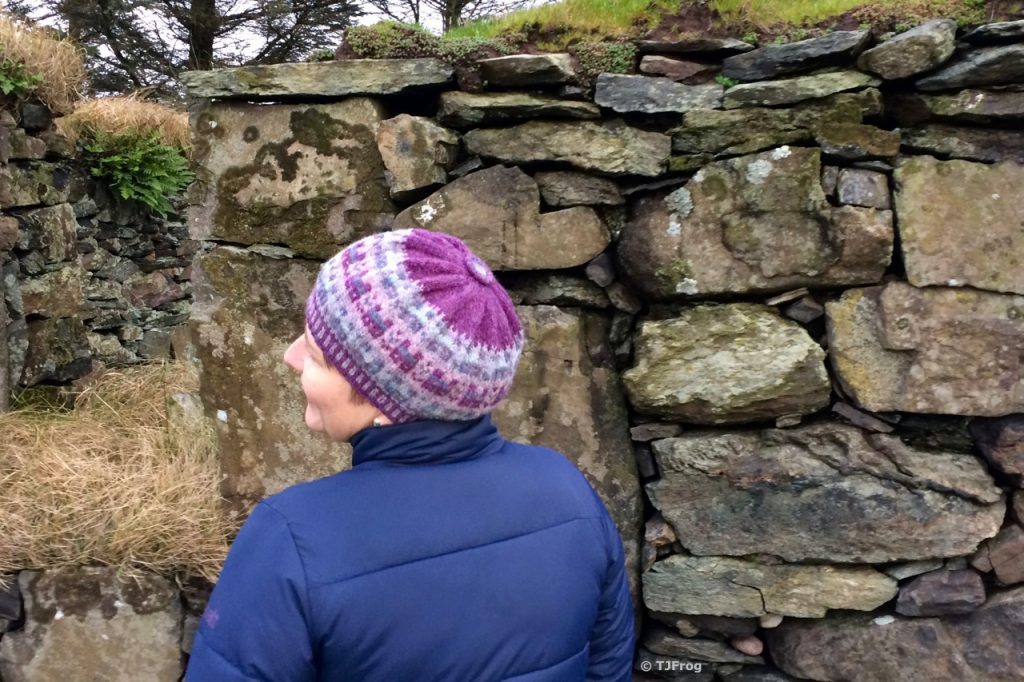