I’ve been finishing cushions of late, and if you follow me on Facebook or Twitter you will have had a ‘sneak peek’ at a couple of Dorset Buttons I made for one of them. 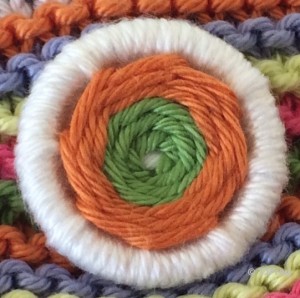 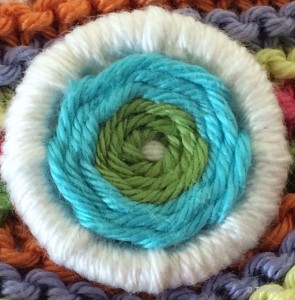 These were for a cushion called ‘Sugar Rush,’ started in June 2014 as part of the Debbie Abrahams Mystery Cushion Club.

And here are the Dorset Buttons in situ on the back of the cushion. 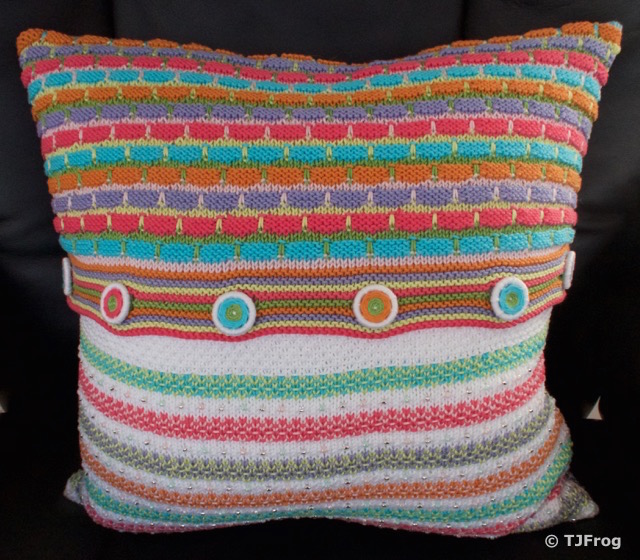 Knitted in Rowan Cotton Glacé you can see Debbie choose a bright, strong palette contrasted with some lighter pastels. 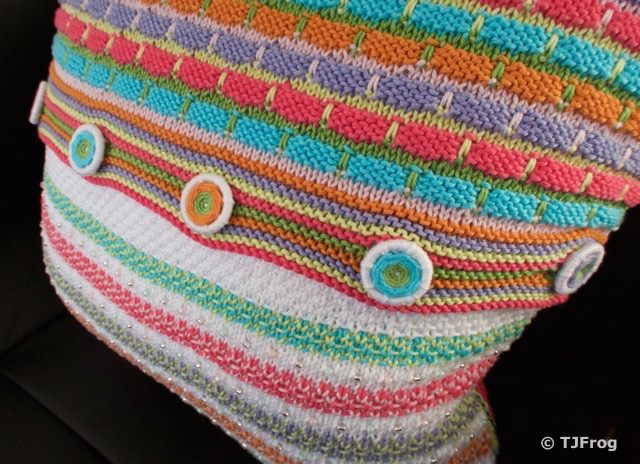 I stayed using the Rowan Cotton Glacé, on a 23mm ring, resulting in quite a chunky Dorset Button.  I decided on white as the outside colour to link to the background of the bottom panel, called Sprinkles.  I choose green as the centre to match the central green line running through the middle of the button band.  Three turquoise buttons depict the strongest colour nearest to the button band and have been placed alternately with a pink, orange and purple button, using all the strongest colours of the palette seen in the upper back panel, called Lozenges. 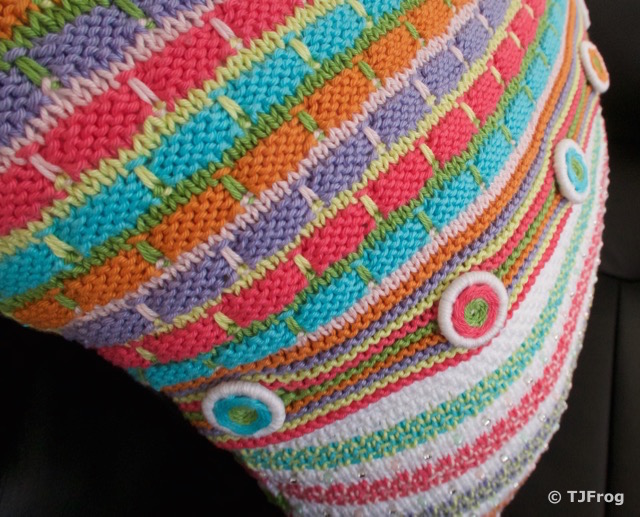 The colours in this cushion are fun, bright and cheery and it has so many great textures and features. 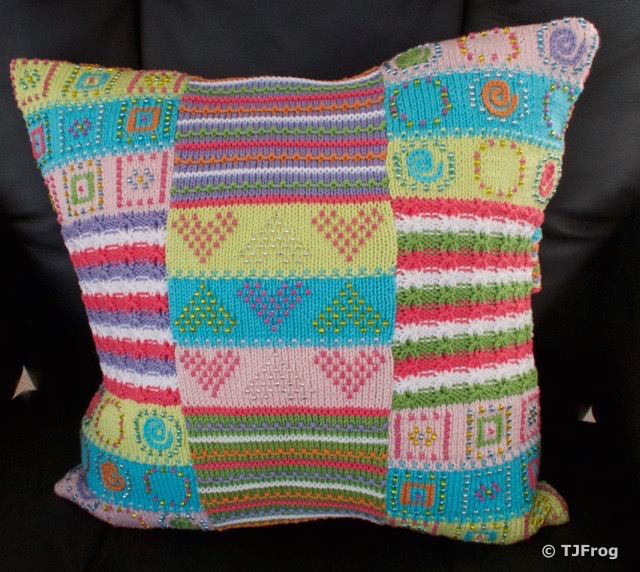 The front consists of a fun selection of squares incorporating Debbie Abrahams Beads, swiss darning, cables & slip stitch.  Each square quickly took shape helped along by having yummy names such as Brighton Rock, Candy Twists, Fondant Icing and Love Hearts, and I love how all the colourful beads add to the sparkle of this cushion.  A cushion that makes me think of summer, it brings a smile to my face every time I see it in the house and adds a cheeriness to the dullest of days. 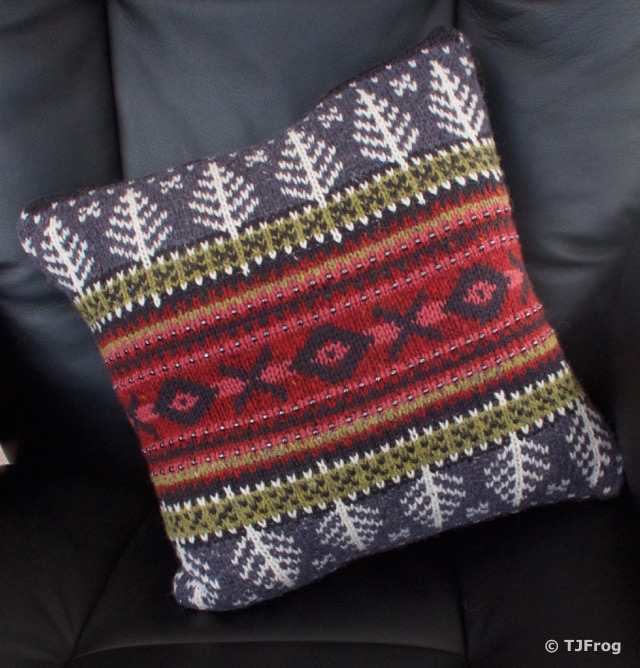 In contrast my second cushion is Jane Crowfoot’s Norwegian Wood, knitted in Rowan Tweed, Felted Tweed and Pure Wool DK.  I started this in March 2015 with little success, as I suffered some sea sickness on a Norwegian knitting cruise.  Once back I picked it up and then for some unknown reason it fell onto the pile of unfinished projects.  Finally in September I dug it out only to find I had about 5 rows left to knit!  Needless to say it didn’t take long to finish off.

The pewter beads really show up against the pink and red, glistening in the light. 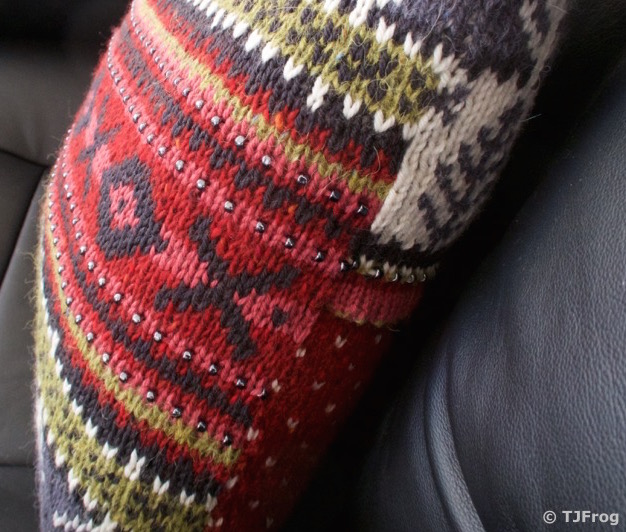 And the picot finishing on the top panel is a lovely way to finish off an edging. 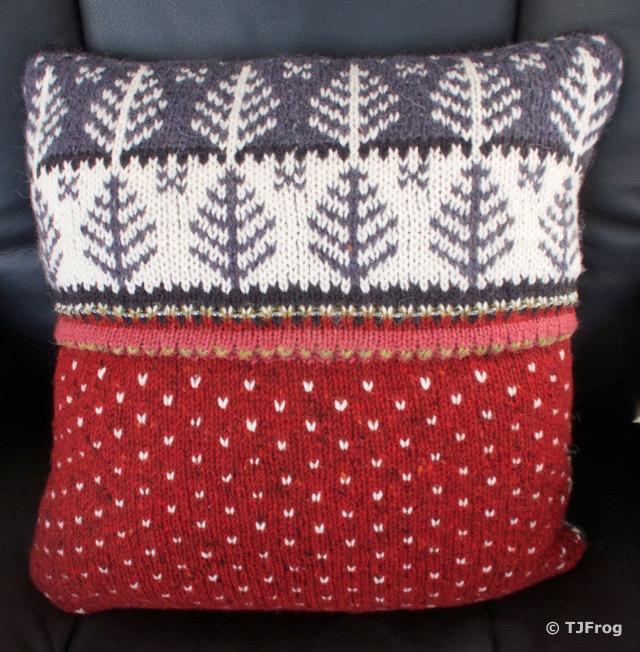 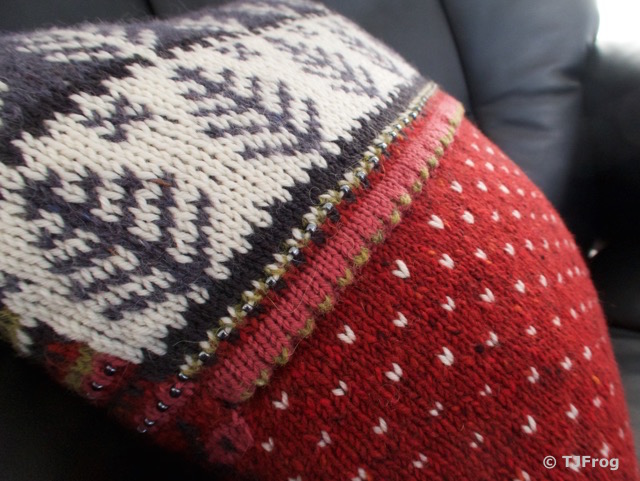 A very snug cushion to cosy up to!