Welcome to the 11th episode of my podcast – India, Knit For Peace

Thank you for listening again or welcome if you are a first time listener.

My schedule has got a little awry with one thing and another – trip to India, returning germs and preps for Edinburgh Yarn Festival.  This episode is a little different mainly focusing on telling you about my experience on my recent trip to India with Knit For Peace.  I will have another episode out at the end of the month where I’ll return to the normal format. 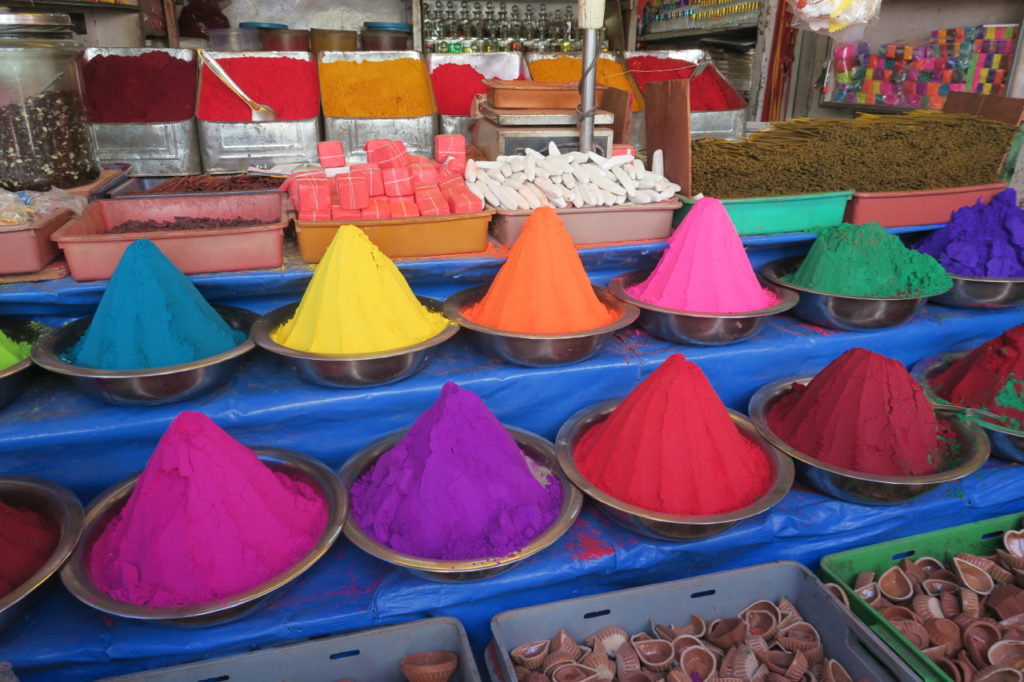 Snow, snow and more snow.  The snow has continued on into February although in between a lot of rain has appeared washing the snow away and leaving very wet soggy fields and a few nasty pot holes in the roads.  I talk about the recent storm with no name we had in comparison to Storm Georgina, how the aurora has been sited on Skye although not by me and the lengthening daylight hours. 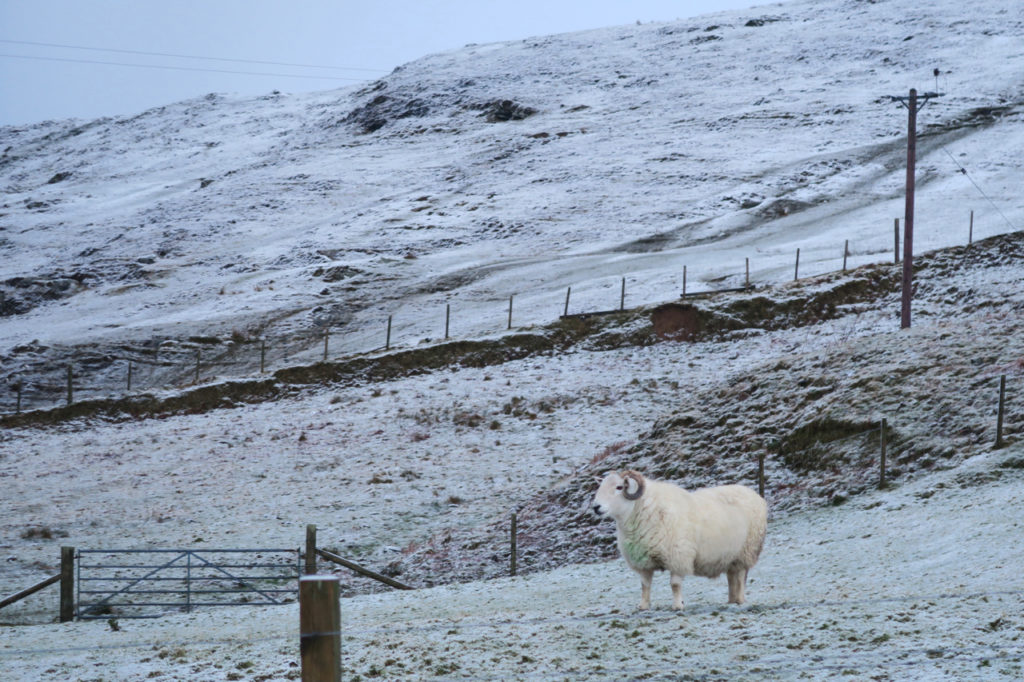 I can reveal I have been invited to be a stallholders at Woolfest 2018 on 22 & 23 June at Cockermouth in Cumbria – hope to see some of you there!

I will also be exhibiting at a new event in Scotland the Aberdeen YarnFest which is on 13 May.

Before then it is Edinburgh Yarn Festival 15 – 17 March and the Corn Exchange.  Time is marching on and there is still much to do although I’m trying to keep calm and work through my to do list.  As I get ready for this show and with me being away I have temporarily shut down the online shop – apologies if you have popped in – you can still see the products although they are not for sale as I now get stock ready to take away.  The shop will reopen at some point during the week commencing 19 March.

There is one item still for sale though a yarn pack supporting the Winter Thyme shawl designed by Sarah Alder of Alder Sign Designs.  This is a beautiful curved garter stitch shawl with a lace edge and I will have it on display at Edinburgh. 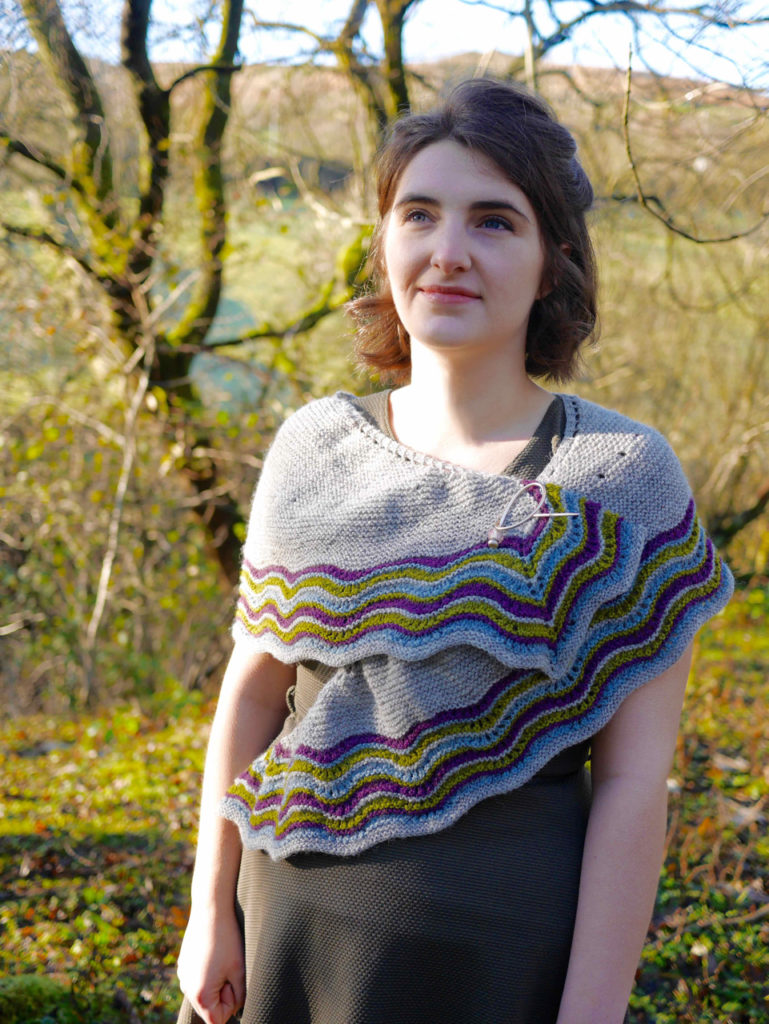 When the shop reopens and if you are coming to Edinburgh you will notice I have new metal rings and I chat about the reason for this on this episode.

I’m currently finalising the details for the labels for my new wool so that information will be with you very soon.

I’m also very excited that I’ve been included in the EYF 2018 podcaster lounge.  Along with 31 other knitting related podcasters from all around the world you will find me at some point in the podcaster lounge which will once again be sponsored by Blacker Yarns and hosted by Louise Scollay of Knit British.

And thank you to everyone for your response to the photo of me taken by my photographer hubby Geraint, albeit he is the first to admit he is not a portrait photographer preferring to take photos of sports people in action, wildlife and landscapes.

This was a 2 week trip organised by Knit for Peace that consisted of 3 main components – knitting workshops with knitwear and crochet designer Jane Crowfoot, opportunity to visit projects supported by the Charities Advisory Trust and some sightseeing which may have included the odd bit of shopping!

We stayed at The Green Hotel in Mysore approximately 145km southwest of Bangalore.  Previously a palace home to one of Mysore’s princesses it has been renovated and was set up by the Charities Advisory Trust as a model of sustainable tourism with all the profits going to charity and environmental projects in India. 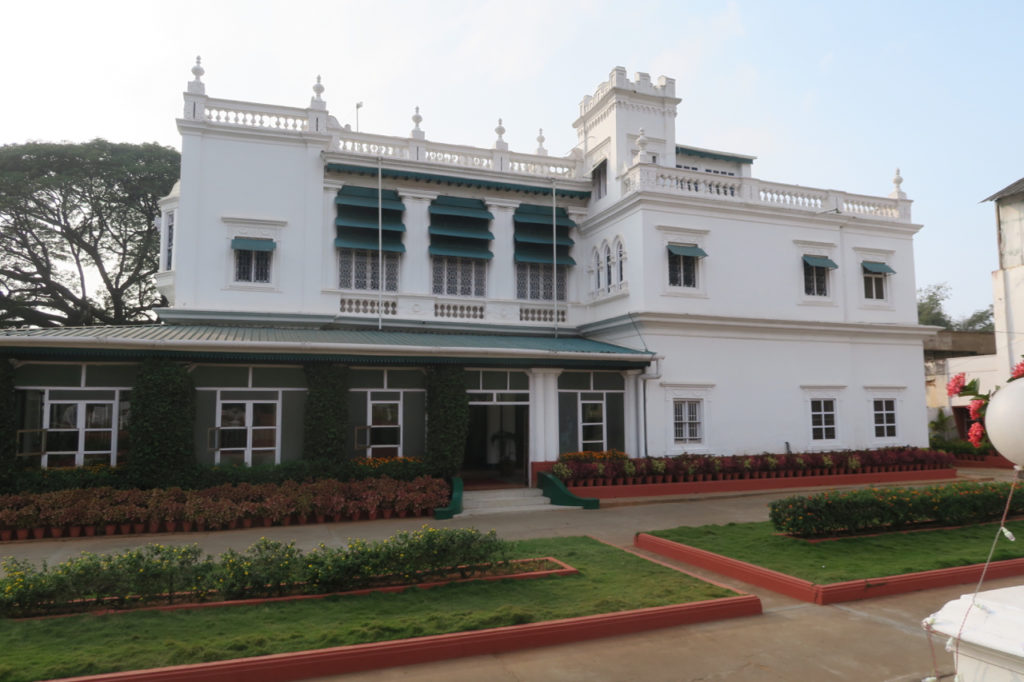 I discuss a bit more about the background to the Charities Advisory Trust its founder Dame Hilary Blume and its connection to a local charity RLHP.  I chat about how Knit for Peace came about and the different type of projects supported by these charities and partnership.

The hotel also has a lovely bakery and coffee shop that employs women from economically and socially excluded communities and this was frequented quite a bit by the knitters as the cakes were delicious. 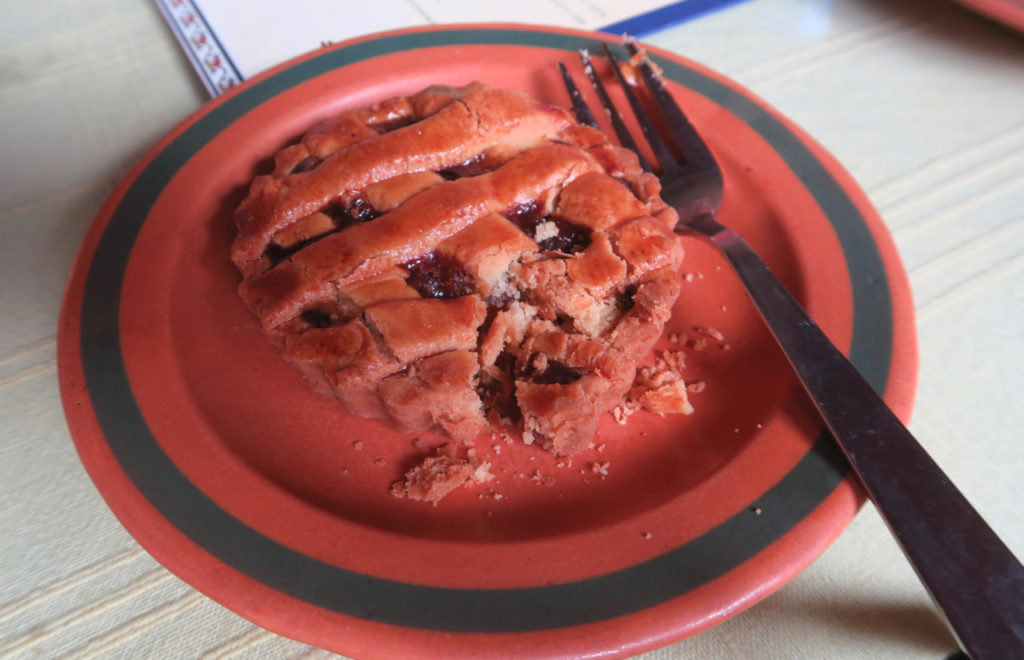 The hotel’s craft shop sold beautiful handmade textiles and products by traditional craftspeople many National winners and paid a fair price for their work.  Much time was spent browsing and many purchases were made. 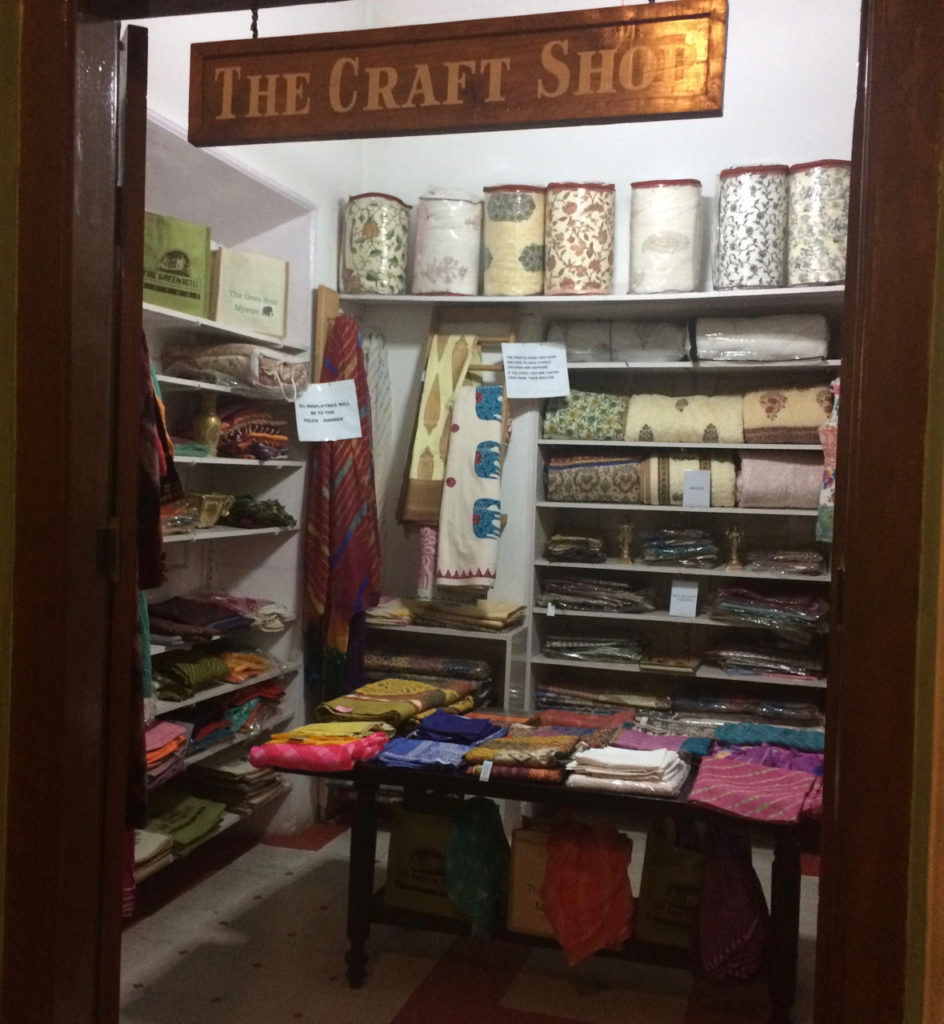 Jane Crowfoot held knitting workshops every weekday morning for 3 hours and we were given a yarn pack with 7 shades of Rowan Summerlite DK cotton and also had Debbie Abrahams Beads to use.  Jane designed 15 different textured, coloured and beaded squares for us to work with.  Sat outside under a canopy of shade it was amazing to see the variety of squares we produced. 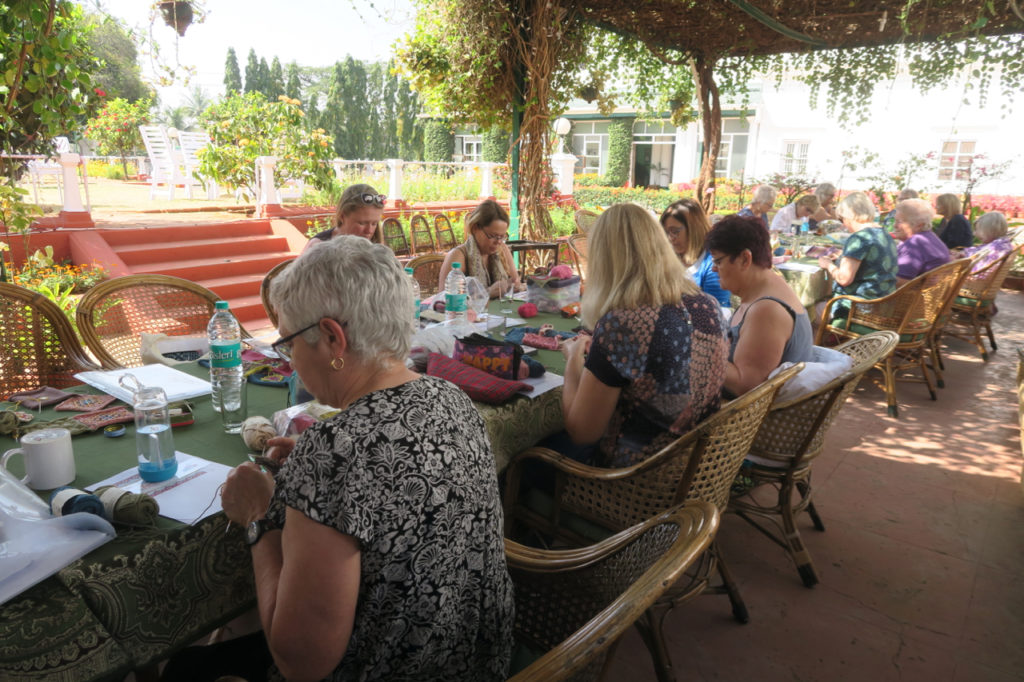 Even Dorset Buttons were made by some people. 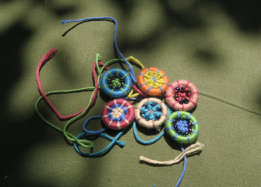 I kept up with my exercise on the trip walking around the University lake most mornings which proved to be an oasis of calm and tranquility amongst chaotic streets.

I chat about the colour inspiration in India which is everywhere including at the lake, the market and on the streets.

I may have done a little shopping myself and I tell you about what was popular including braids, beads, silks, linens, cotton and many more items.

There was also time for sightseeing which included the Mysore Palace illuminated on a Sunday evening and a popular spot for both locals and tourists.   I talk about my day trip out which included stopping on the roadside to see jaggery – or sugar – being made.  We spend time at Somnathpur visiting a temple of great architectural design with detailed stone carvings followed by a trip to Tipi Sultan’s Summer Palace with breathtaking paintings and murals on the walls and ceilings.  And I cover my walk up Chamundi Hill via 1000 steps to visit a Hindu Temple.

There were a number of charity projects we were able to visit which included seeing government schools, libraries funded by RLHP, the boys & girls orphanages as well as an ironing income generation project, a rural project and and organic vegetable project and a health programme for under nourished children. 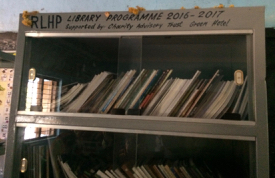 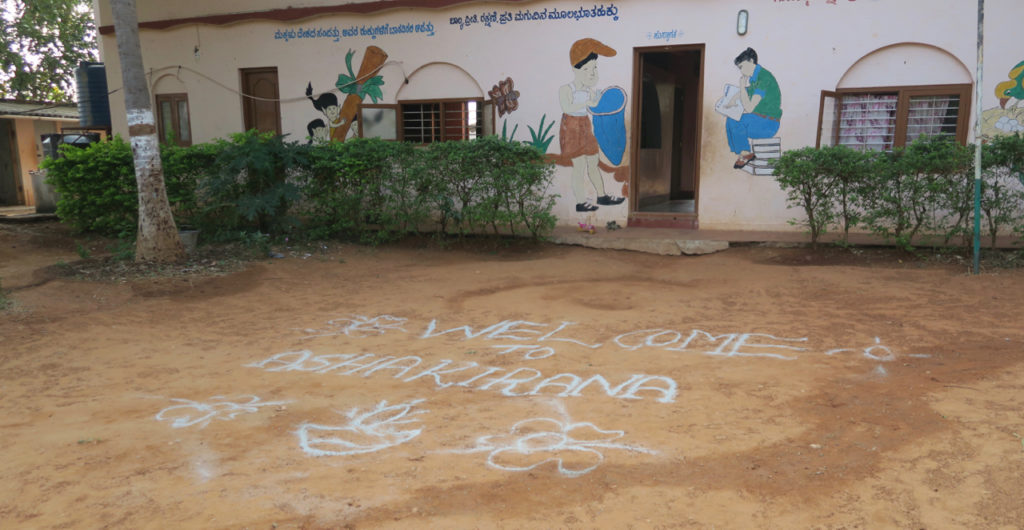 Having had the opportunity to chat with Jane during the trip I found out the different ways in which she supports Knit for Peace which have included running knitting and crochet workshops at the Knit for Peace Headquarters, raffling off pieces of donated knitwear, adding a £5 donation to the cost of one of her kits and donating patterns to raise much needed funds to support those affected by the Grenfell Tower Fire.

If you are interested in this holiday I hope this has given you a taster and if you are a supporter of Knit for Peace it may have informed you a bit more about them and the Charities Advisory Trust.

My next episode will be out on 27 February and will be back to the usual format with an interview from one of the EYF vendors – a hand-dyer who lives on mainland Scotland – I’ll leave you to guess who that might be . . .

Music – the music is:

One Frog For a Prince, by Ron Patton & licensed from Melody Loops.